Thomas L. Rothstein obtained his MD and PhD degrees through the Medical Scientist Training Program at Duke University. He completed advanced clinical training in Internal Medicine and Hematology/Oncology at The George Washington University Hospital in Washington, DC and Beth Israel Hospital/Harvard Medical School in Boston, MA. He undertook advanced research training at the National Cancer Institute in Bethesda, MD and the Massachusetts Institute of Technology in Cambridge, MA.

He was appointed Assistant Professor of Medicine and Assistant Professor of Microbiology and Immunology at Boston University School of Medicine/Boston Medical Center (Boston, MA) and rose to the position of full Professor, filling roles as Associate Chief for Research in the Section of Hematology/Oncology, as Director of the Immunobiology Unit, and as Director of the T32 Hematology Training Grant. He was subsequently recruited to the Feinstein Institute for Medical Research (Manhasset, NY) as Investigator, Professor in the Elmezzi Graduate School of Molecular Medicine, and Head of the Center for Oncology and Cell Biology.

Upon his arrival here in 2016, Dr. Rothstein was named Assistant Dean for Investigative Medicine, Director of the Center for Immunobiology, and Professor of Biomedical Sciences. In 2020, he was appointed Professor and Founding Chair of the Department of Investigative Medicine, along with his position as Director of the Center for Immunobiology.

Throughout his research career Dr. Rothstein has been continuously funded by the NIH, and has also received grants from the Lupus Research Institute, and the American Cancer Society. He has mentored over 50 graduate students and postdoctoral fellows in his laboratory. He has served on mulitiple review panels for NIH, the Arthritis Foundation, and the Lupus Research Institute.

He is an elected member of the American Society for Clinical Investigation, the Association of American Physicians, and the Kunkel Society. Among his recent editorial duties he was the Founding Editor-in-Chief of Frontiers in B Cell Biology (2010-2020) and is a member of the editorial board for Cellular Immunology. He serves on the scientific advisory board for the Immunotherapy conferences sponsored by the Center for Molecular Immunology in Havana, Cuba, and was co-organizer for the Merinoff Symposium 2014: B-1 Cell Development and Function.

In the Center for Immunobiology, we welcome postdoctoral fellows and research assistants/associates to be a part of our team and the exciting discoveries that are taking place in each of our research labs. More information about these opportunities can be found by contacting the Department of Investigative Medicine at 269.337.4351 or tom.rothstein@med.wmich.edu, or check out the medical school’s latest job opportunities.

Our laboratory group is focused primarily on B lymphocytes (B cells) and the antibodies they produce. Within the universe of B cells, we maintain an intense interest in the subpopulation termed B-1 cells. These B-1 cells are present in mice and have been identified more recently in humans. B-1 cells constitutively generate antibodies that are especially effective at counteracting infectious pathogens, termed natural antibodies.

More recently these antibodies have been implicated in protection against cardiovascular disease and cancer. Because B-1 cell numbers and the level of natural antibodies decline with age, we have proposed that B-1 cell activity sets a rheostat for susceptibility or risk to a number of diseases of aging. Further, we speculate that B-1 cell-derived antibodies may be useful as therapeutic agents. We are exploring the origin of human B-1 cells, age-related changes in B-1 cells and the antibodies they produce, and the role of B-1 cells and B-1 cell antibodies directed against specific antigens in particular diseases, including tau (Alzheimer''s Disease), MGO-apoB100 (cardiovascular disease), NGcGM3 (lung cancer), and PC (pneumococcal pneumonia).

Many of these studies involve amplifying immunoglobulin genes from single sorted cells for sequence analysis and producing those antibodies in vitro for repertoire evaluation. These kinds of techniques are being applied to B cells extracted from cerebral spinal fluid to understand the nature of B cells there. Additional work focuses on the role of B-1 cells in promoting autoimmune diseases and in downmodulating sepsis.

We maintain a longstanding interest in intracellular signaling events that initiate B cell responses to antigen. We are particularly focused on the interplay between IL-4R signals and the signaling cascade produced by surface immunoglobulin antigen receptor (sIg) engagement. IL-4 exposure before antigen receptor triggering intensifies the latter through operation of an alternate, signalosome-independent pathway. We have suggested that this IL-4-induced intensification of antigen receptor signaling plays a key role in the malignancy of chronic lymphocytic leukemia whose cells appear indolent in the periphery but expand during passage through tissue sites. We are working on understanding the mechanism that underlies crosstalk between IL-4R and sIg and how increased and alternate pathway signaling is programmed.

We also maintain a longstanding interest in the anti-apoptotic gene we cloned from inducibly Fas-resistant B cells and named FAIM, for Fas Apoptosis Inhibitory Molecule. FAIM has both short and slightly longer forms, the latter of which is restricted to the brain. FAIM is highly evolutionarily conserved and yet animals in which the gene has been knocked out are essentially normal, with only minor variation in B cells and antibodies. This has led us to speculate that FAIM is more involved with stress than with Fas-mediated apoptosis. We are working on understanding the interrelationships among FAIM, stress-related proteins, and various forms of cellular shock, such as heat and oxidative stress.

Alongside these various projects we have begun studying a collection of pediatric hereditary anemias, an example of which is Diamond-Blackfan Anemia (DFA). These diseases are caused by mutation in one or another ribosomal protein and comprise a group termed ribosomopathies. Many questions remain unresolved, such as why anemia is the principal manifestation of a mutation that affects all ribosomes, and why the degree of anemia undergoes occasional, spontaneous  remissions and relapses. We are studying DFA in terms of how cellular stress is handled, the degree of susceptibility to apoptosis, and the effect of ribosomal dysfunction on B cell activity and antibody production. 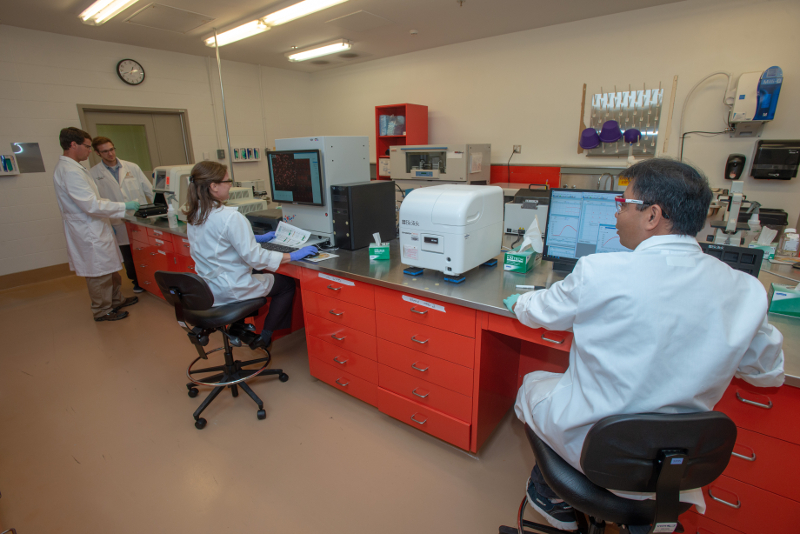 Our laboratory group is committed to pursuing inquiry, disseminating knowledge, and fostering critical thinking that encourages lifelong learning. Take a look at a comprehensive listing of Dr. Rothstein''s most recent publications.