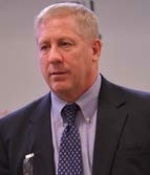 Dr. Lewandowski is a Board-Certified Clinical Neuropsychologist and the Clinical Director of Neuropsychology Associates. He specializes in the evaluation and treatment of children, adolescents and adults who suffer from cognitive, emotional, and behavioral difficulties related to neurological diseases or injuries, including memory impairment, concussions, dementia, traumatic brain injury, learning and attention disabilities and autism.

Dr. Lewandowski completed his doctoral work at Virginia Tech, intern training at Walter Reed Army Medical Center, and postgraduate residency training with the Department of the Army. He earned honors as a Distinguished Military student and Distinguished Military Graduate through the Reserve Officer Training Corps where he was awarded a Regular Army commission and completed paratrooper training at the U.S. Army Airborne School. He served as a neuropsychologist on active duty with U.S. Army Medical Department at Walter Reed Army Medical Center and Bethesda Naval Medical Center (Washington, D.C.), Fort Sam Houston (Texas), and with the U.S. Army Forces Command with the 4th Infantry Division at Fort Carson (Colorado).

Dr. Lewandowski holds hospital privileges at both Borgess Medical Center and Bronson Methodist Hospital where he consults to the Emergency and Trauma Services Departments, and is active in teaching resident physicians and graduate students in the cognitive and emotional aspects of Emergency and Trauma Medicine. He holds multiple adjunct appointments at Western Michigan University's Graduate School in the Departments of Psychology, Counselor Education and Counseling Psychology, the College of Health and Human Services, and teaches undergraduates in the Department of Military Science and Leadership through the Haworth College of Business. Dr. Lewandowski is also a Clinical Assistant Professor in the Department of Psychiatry at Western Michigan University Homer Stryker MD School of Medicine. He is an instructor in neuroanatomy for the College of Health Sciences at Marquette University where he assists in teaching an intensive short course in the neuroanatomical dissection of the human brain and spinal cord.